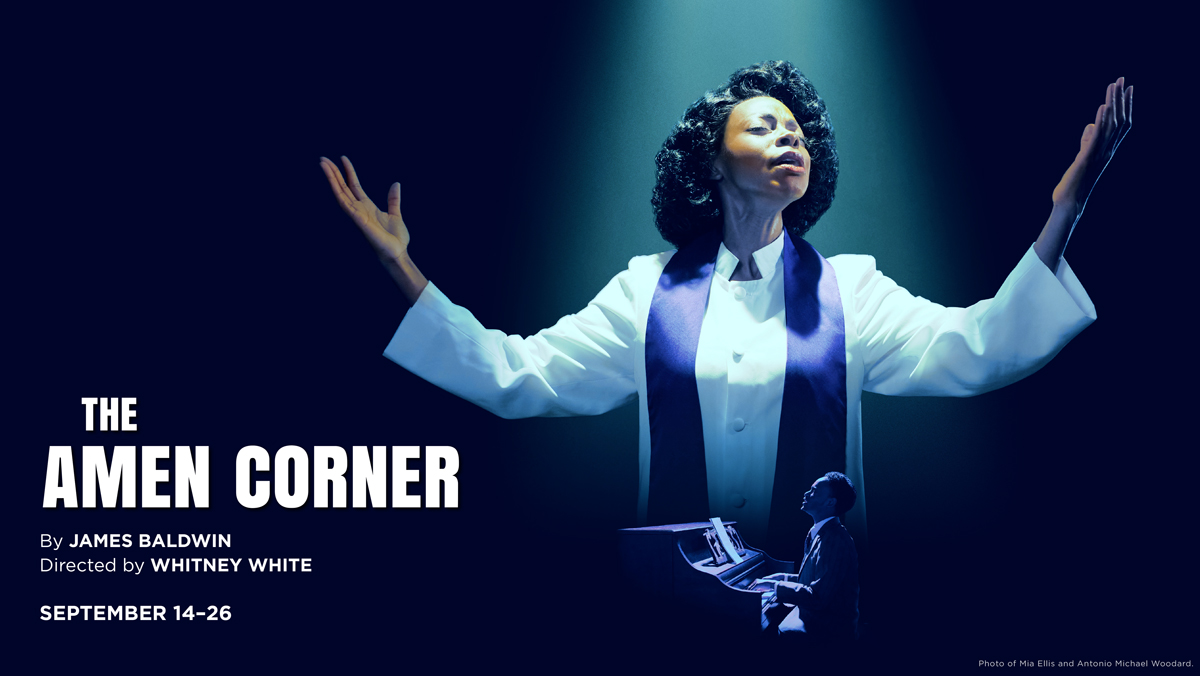 “Brilliantly directed by Whitney White” (Brightest Young Things), James Baldwin’s The Amen Corner returns to Sidney Harman Hall to complete its original run. In a 1950s storefront church in Harlem, Pastor Margaret rails at her congregation and her teenaged son for their vices. Surrounded by “a choir of powerhouse singers” (The Washington Post) belting songs of redemption, Margaret must face the music herself when memories of her own troubled past return. See why The Amen Corner was praised as one of the best productions in 2020 by The Washington Post in this limited, two-week engagement.

The Amen Corner is presented by arrangement with Concord Theatricals on behalf of Samuel French, Inc.

During the pre-season runs of The Amen Corner and Remember This: The Lesson of Jan Karski, STC will require that all patrons provide proof of vaccination to attend any performances or events. In addition to audiences, STC has mandated COVID-19 vaccinations for all performers and theatre staff. Please visit our Health and Safety page for full guidelines about providing proof of vaccination at the theatre.

Only performers and people invited onstage for talkbacks will be unmasked. We ask that attendees remain masked while within our venues, including during performances, unless they are eating and drinking in designated lobby areas. STC is committed to the safety and wellbeing of everyone in our spaces, and we are monitoring the ongoing COVID-19 pandemic and will make adjustments as needed. Thank you for your understanding.

JAMES BALDWIN was born in Harlem, New York City, August 2, 1924 and died on November 30, 1987. He offered a vital literary voice during the era of civil rights activism in the 1950s and ’60s. The eldest of nine children, his stepfather was a minister. At age 14, Baldwin became a preacher at the small Fireside Pentecostal Church in Harlem. After he graduated from high school, he moved to Greenwich Village. In the early 1940s, he transferred his faith from religion to literature. Critics, however, note the impassioned cadences of Black churches are still evident in his writing. Go Tell It on the Mountain (1953), his first novel, is a partially autobiographical account of his youth. His essay collections Notes of a Native Son (1955), Nobody Knows My Name (1961), and The Fire Next Time (1963) were influential in informing a large white audience. His other novels include Giovanni’s Room (1956), about a white American expatriate who must come to terms with his homosexuality, and Another Country (1962), about racial and gay sexual tensions among New York intellectuals. Baldwin’s play, Blues for Mister Charlie, was produced in 1964. Going to Meet the Man (1965) and Tell Me How Long the Train’s Been Gone (1968) provided powerful descriptions of American racism. As an openly gay man, he became increasingly outspoken in condemning discrimination against lesbian and gay people.

“BREATHTAKING…Entertaining but full of profundity in an American classic kind of way.” –DC Metro Theater Arts

“HALLELUJAH!…It is a great pleasure to witness a remarkable play written by one of America’s most gifted and important 20th-century writers.” –CurtainUp

Articles about The Amen Corner

By James Baldwin Directed by Whitney White
Shakespeare Theatre Company’s 2021/22 Season is made possible by Michael R. Klein and Joan Fabry and the Harman Family Foundation.