The Past Uncovered: James Hewlett 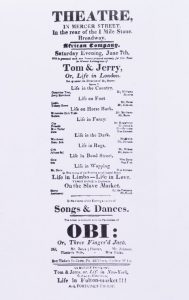 In 1821, America’s first known Black playwright William Henry Brown started “the first recorded black theater troupe in America.” It was called The African Company, located in New York City. James Hewlett became the first black American Shakespearean actor when he took on the title role in The African Company’s first production of Richard III. After performing the role on stage, he then toured the country performing Shakespearean scenes.

When The African Company moved next door to the Park Theatre, a famous white institution, its manager started a riot in hopes of destroying The African Company. Police descended on the company during a performance, arrested the actors and forced them to pledge they would never perform Shakespeare again. 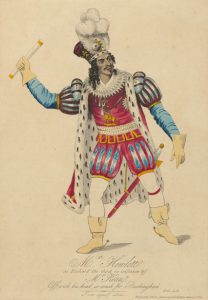 In 1824, English actor Charles Matthews visited America, where he met Hewlett. Returning to England, he performed his own show A Trip to America, which included racist caricatures of Hewlett and The African Company. Hewlett responded with an open letter in The National Advocate on May 8, 1824:

“You have, I perceive, by the programme of your performance, ridiculed our African Theatre in Mercer Street and burlesqued me with the rest of the Negro actors, as you are so pleased to call us—mimicked our styles—imitated our dialects—laughed at our anomalies—and lampooned, shamed, even our complexions. Was this well for a brother actor?…I was particularly chagrined at your sneers about the Negro theatre. Shakespeare makes sweet Desdemona say, ‘I saw Othello’s visage in his mind.’ Now, when you were ridiculing the ‘chief black tragedian’ and burlesquing the ‘real Negro melody,’ was it in my ‘mind’ or my ‘visage’ which should have made an impression on you?”

Hewlett’s career went into decline after 1834 and it is reported he died in 1849. Though his career was short, he opened doors to new options for Black actor in classical theatre.