The Past Uncovered: Henrietta Vinton Davis

Actor, playwright, and activist Henrietta Vinton Davis was born in Baltimore, Maryland in 1860 and spent much of her artistic life as a “local” actor in Washington, D.C. 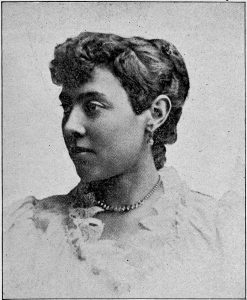 When Davis made her professional debut in D.C.’s Marini’s Hall in 1883, she was introduced by none other than Frederick Douglass. That night, she recited the speeches of Shakespeare’s leading ladies, including Portia from The Merchant of Venice and Juliet from Romeo and Juliet. Due to her success in Washington, Davis toured New York, Detroit, and other cities, adding Cleopatra and Lady Macbeth to her repertoire. 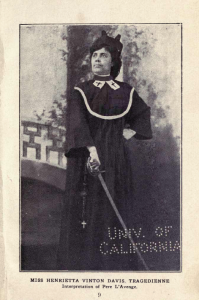 After returning to D.C. in 1884, she performed scenes from Macbeth, Richard III, and more at Ford’s Opera House, but while she portrayed many of Shakespeare’s great heroines, Henrietta Davis was never allowed to perform the roles in full productions. As Errol Hill notes in Shakespeare in Sable, “her career encompasses all of the promise, high expectations, and frustrations experienced by Black actors of her generation.”

Discouraged, she left the theatre and turned to politics, working closely with Marcus Garvey who called her “the greatest woman of the Negro race.” Davis passed away in Washington, D.C. in 1941, yet her legacy lives on.