Thornton Wilder’s Pulitzer Prize-winning play Our Town is best known for its poetic language, cutting commentary on life as we know it, and the almighty power of a few chairs and a ladder. Producing the play inside the grand Sidney Harman Hall, director Alan Paul and his visionary design team have given themselves quite the challenge: How do we make this sweeping narrative feel intimate in such a palatial space? 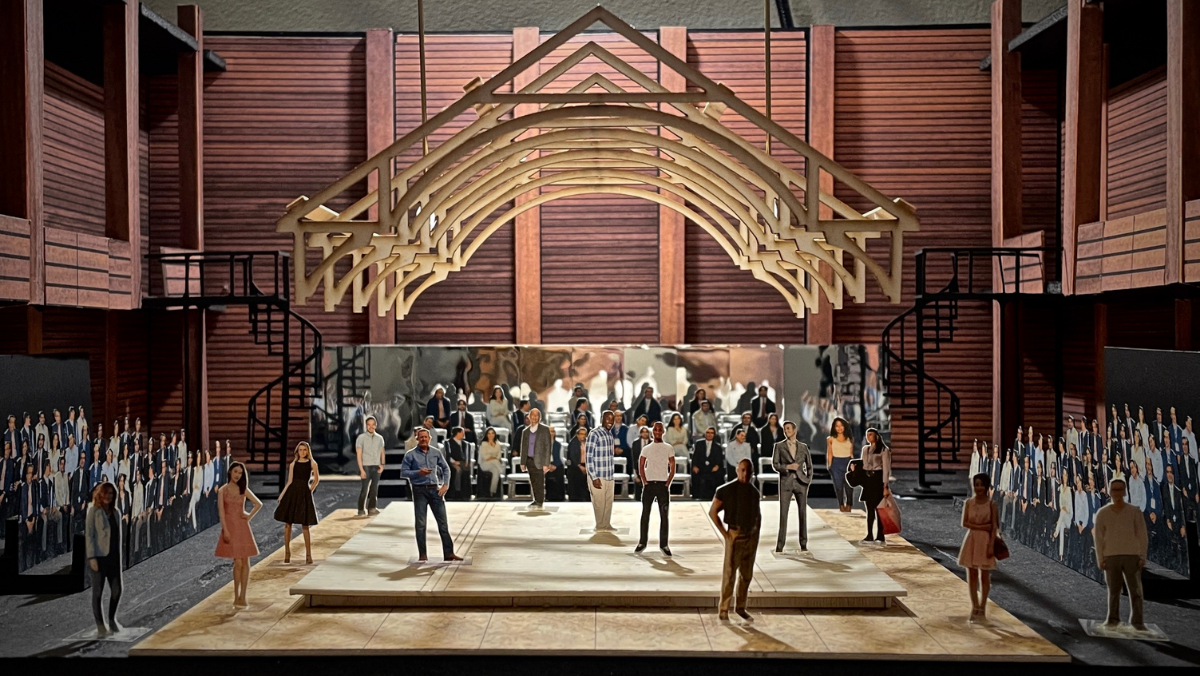 Set model for Our Town, designed by Wilson Chin.

Pushing the apron into the audience and adding seats on stage, Scenic Designer Wilson Chin (The Way of the World, Pass Over) has transformed our proscenium space into a theatre in the round—an exciting first for Sidney Harman Hall! Complete with a mirrored back wall, floating rafters, and spiral staircases, this is an epic Our Town aimed at building a shared space between the performers and the audience. A few chairs and the words of the actors will be primarily used to designate shifts in time and location. Chin and Paul also have something very exciting planned for the famous Act Three memory scene that will surprise audiences and elevate Sidney Harman Hall once more. “I wanted to play with the actor and audience relationship,” says Chin. “So it’s a pretty simple design with epic gestures to make it feel like we’re grasping at the cosmos.”

Costume Designer Sarafina Bush (Pass Over) has blended modern style with vintage shapes, evoking a timeless feel while still respecting the original period. Wilder wrote the play without scenery and props to heighten our focus on the actors and the poetry of the piece—the costumes are meant to feel natural and relaxed, functional over fashionable. Yet each piece of clothing tells us a little bit more about each character. “The costumes are an exercise in simplicity,” notes Paul. “It is both very much of its time and also a modern take on the period.”

Another key member of the design team is composer, lyricist, and librettist Michael John LaChiusa, who Paul refers to as “one of my heroes.” The five-time Tony Award nominee, best known for Hello Again, Marie Christine, and The Wild Party, has composed all new music for Our Town that is going to underscore the entire production and add to the tone of the show, gently complementing the lyricism of Thornton Wilder’s prose. The music features organ (representing the church), violin (to pay homage to Aaron Copeland’s Oscar-nominated score from the 1940 film), and electric guitar (to mirror the modern interpretation of this production).

Our Town is an American classic with a twist; our production design gives a respectful tip of the hat to the original while adding a little STC flair into the mix. Don’t miss your opportunity to experience this unique production for yourself. Performances run May 12 through June 11. Reserve your spot today! Order online anytime or call our helpful Box Office at 202.547.1122 from 12–6 p.m. daily.