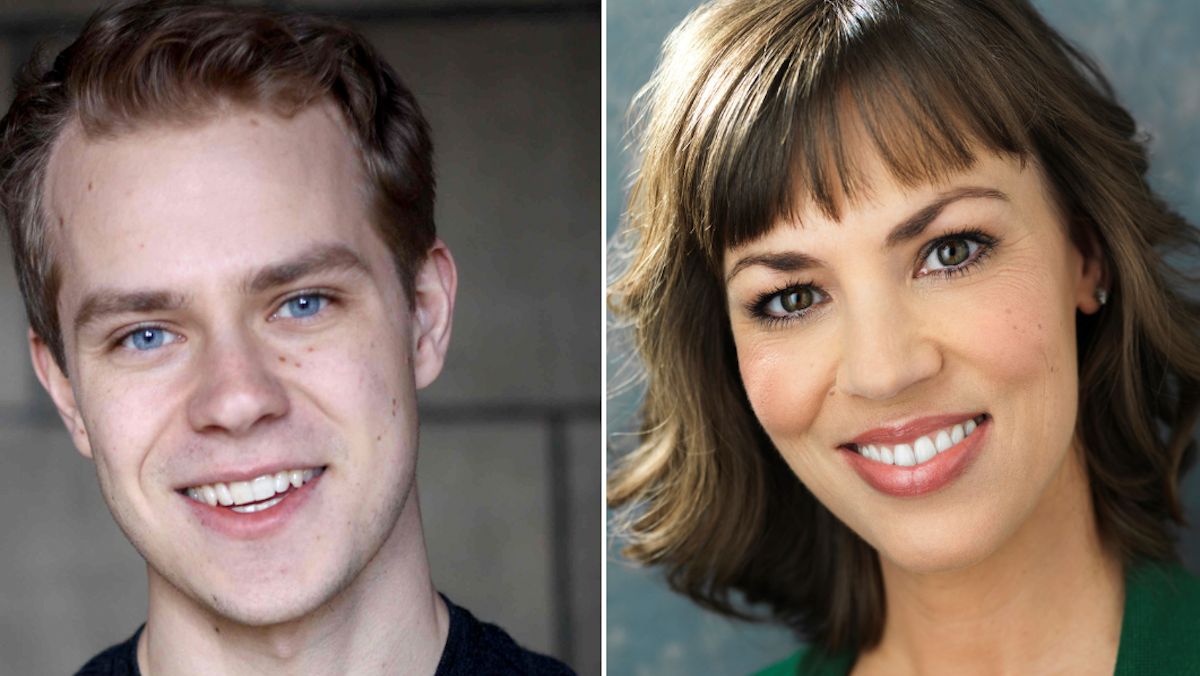 Shakespeare Theatre recently conducted an emailed interview with two alums from the 2019 Class of STC’s Academy for Classical Acting (ACA) in residence at The George Washington University who also happen to be featured in our upcoming production of Lolita Chakrabarti’s Red Velvet. Tro Shaw (playing Halina Wozniak/Betty Lovell/Margaret Aldridge) and Samuel Adams (playing Casimir/Henry Forrester) give audience members a closer look at their lives and creative processes.

1. In what ways do you feel your ACA training prepared you for the roles you’ve taken on thus far?

TS: The most helpful thing I got out of my training with the ACA was the Alexander work. It’s the practice of releasing unnecessary tension in the body and opening up space to move and breathe more fully and freely. I didn’t realize how much tension I was holding in my body until I began working with Chris Cherry, our Alexander teacher. Now I practice it all the time, in all facets of my life.

SA: I was very fortunate to work with some incredibly talented teachers, and I was exposed to the fantastic theatre scene in Washington, D.C. During my year at the ACA, I saw over 30 plays and performances and was inspired by the high caliber of production and the talented, supportive community of theater-makers in the area.

2. What is something unique to ACA that you won’t find in other acting programs?

TS: I did my undergrad at Carnegie Mellon University a number of years ago, and when I started looking at grad programs, I wanted to find a program that would offer me the opportunity to re-engage in the craft without the full 3-year conservatory process. I was particularly interested in focusing on Shakespeare and classical text and the ACA offered me exactly what I was looking for.

SA: The fact that the ACA was a one-year program was an enormous selling point: not only did I have the opportunity to completely eat, sleep, and breathe theatre, but I also was only out of the industry for a year.

3. What was one of the biggest lessons from your time at the ACA?

TS: Breath is life.  Before the ACA I did a lot of holding my breath on stage, and a big part of the Alexander technique is about breathing and opening. “Act at the speed of life” is an Ed Gero-ism I keep coming back to. He talked a lot about breathing in information and responding on the exhale, and how it takes longer to breathe in heavy information. Also, Floyd King offered the idea that the characters we play only get to live for the 2 or 3 hours of the play, so everything they do has an importance and an urgency to it. Alec Wild, the program director, worked with me on letting go of control and “stepping into the place of not knowing”. And Dody DiSanto, our movement teacher, was amazing at teaching (and modeling) a sense of wonder and exploration through the mask and clown work.

4. What are you most excited about within the upcoming production of Red Velvet?

TS: Our set is on a turntable, and I am so excited to get into the theater and see the set do its full rotation. I think it’ll be pretty stunning! Also, I can’t wait to see all the gorgeous period costumes. It’s going to be a visually stunning production.

SA: The people working on this play have been incredible. Everyone is brimming with talent, passion, and a dedicated investment to telling an important story. Despite being such a pioneering actor, Ira Aldridge’s story is largely unknown (I hadn’t heard of him until having first read Red Velvet a few years ago), so I’m very excited that so many people will be able to hear his story.

5. What has been your favorite moment from the Red Velvet rehearsal room so far?

TS: There are so many it’s hard to single out just one. Our director, Jade King Carroll, is such a generous and patient collaborator. Her thoughtfulness and openness set the tone each day of rehearsal and the entire cast is made better by it. We had the opportunity during the first couple days of rehearsal to go around and tell the story of how we got into theatre, and that was an amazing way to get to know each of the artists in the room, to see and be seen. It was a lovely bonding moment for us all.

SA: Our rehearsals were interrupted by some Covid cases, and it was such an amazing feeling once everyone was safely back in person. It made me remember how lucky we are to make theater. It always astonishes me how fragile and resilient art can be.

6. Why do you think audiences should see this show?

TS: I can’t wait to see how audiences react to this story. While it’s set in the early 1800s, it feels incredibly timely. It’s a story about a black American actor who brought Shakespeare to many parts of Europe but wasn’t allowed to thrive in his home country or in high society London because of the color of his skin. It focuses on the few days he spent at the Covent Garden Theatre in 1833, a moment that could have launched him into worldwide fame. I am really hoping this play inspires audiences to do their own research to learn more about this incredible man, Ira Aldridge.

SA: The story of Ira Aldridge is such an important one but remains largely unknown. His story tells us so much about the history of theater, the unstoppable passion that some people have for it, and the continually arduous road that artists of color have faced.

7. What is your favorite thing about theatre and/or acting in D.C.?

TS: My favorite thing about calling the DMV my home is being a part of this rich artistic community. All the local artists I have collaborated with have been so inspiring and dynamic to work with. The theatre happening in D.C. feels powerful, meaningful, and complex. D.C. audiences are not afraid of being challenged with new plays or plays with tricky subject matter. They don’t seem as interested in fluffy entertainment for entertainment’s sake.

SA: D.C. has such a vibrant, diverse, and dedicated theater scene. The community is tight-knit and supportive, and it’s wonderful to be in a town that fosters such excellence.

8. What’s your favorite place to visit/thing to see in D.C.?

TS: I am in constant awe of the historic feel of D.C. I love visiting the monuments, particularly the Lincoln and MLK monuments, as well as walking around the Capitol. The architecture is breathtaking and makes you feel like you’re a part of history in the making.

SA: I love the Folger Shakespeare Library and Theatre, and I can’t get enough of the Botanical Gardens.

9. Can you tell us a little about one of your favorite productions? This can be one you’ve seen or one you’ve been in.

TS: I saw two productions in the 2018/19 Season that were real standouts. I absolutely loved Nell Gwynn by Jessica Swale at the Folger. I remember being blown away by the ensemble nature of the show and how collaborative it felt. I also loved Oslo which was presented by Round House Theatre. Another impressive ensemble shows and with such a powerful and painful subject matter.

SA: Just before the pandemic, I appeared as Mozart in Amadeus at Folger Theater. That theater has a very special place in my heart, and it was a dream come true to be able to perform such a great character in that theater.

10. Dream show to be a part of (and dream role within that show)?

TS: If we’re talking Shakespeare, my dream role is Imogen in Cymbeline. I love her journey from rebellious daughter to doting young wife to wandering lost soul to battle-weary warrior. She is, in my opinion, the most exciting female character Shakespeare ever created.

My other dream role is Mairead in Martin McDonagh’s Lieutenant of Inishmore. She is such a badass gal, and I love to tap into that inner rough and tumble tomboy in me.

As you can see, the cast and crew of Red Velvet are working hard to bring this incredible story to life. Their raw talent and experience guarantee an amazing production. Red Velvet is in production at Michael R. Klein Theatre at the Lansburgh from June 16 to July 17. Be sure to check it out!