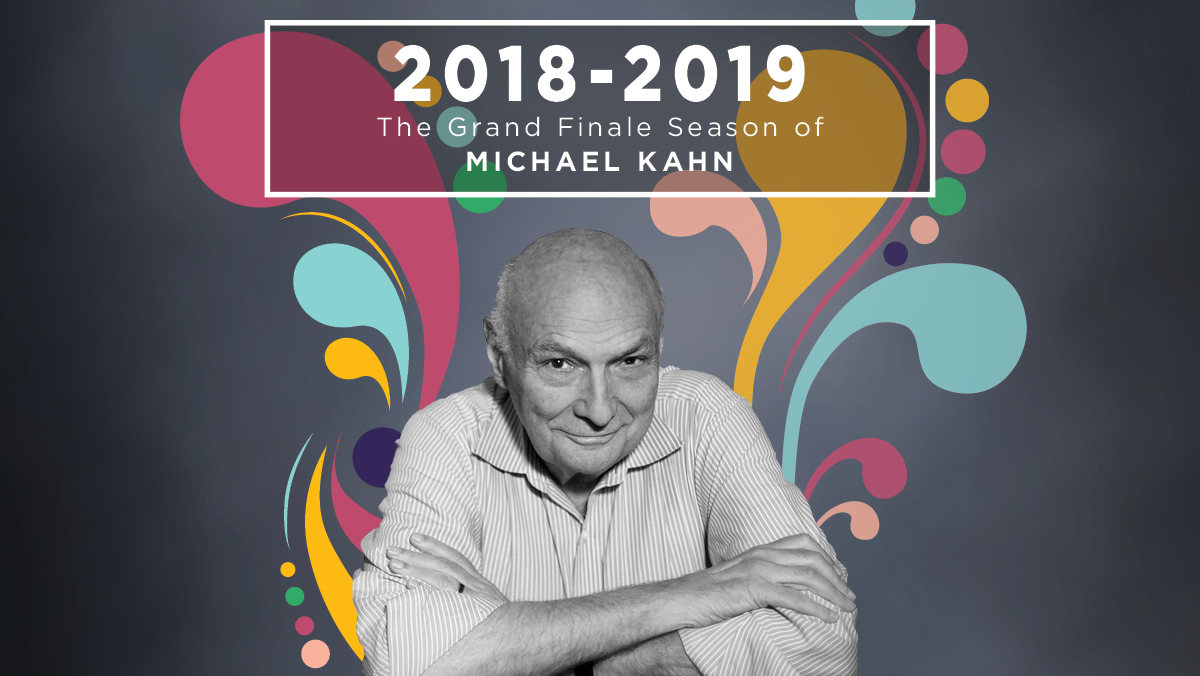 Welcome. I have put a great deal of thought into my final season with the Shakespeare Theatre Company. I think you’ll like it. This Grand Finale Season will include two world premieres by celebrated playwrights, a raucous adaptation of a classic novel, a visiting production that has earned 19 major awards and two much-loved works by the Bard. All we need now is you.  I invite you to subscribe today.

THE COMEDY OF ERRORS

I am an ass, I am a woman’s man, and besides myself.

Two sets of twins, each with the same name—what could go wrong? Everything, apparently. Leave logic behind and delight in the confusion of Shakespeare’s beloved comedy, where servants misplace their masters, wives overlook their husbands, and sons forget their fathers. The blunders double, triple and cube until chaos reigns—and everyone is pretty sure that everyone else is completely insane. With a cast of beloved STC performers, Associate Artistic Director Alan Paul (Kiss Me, Kate; Romeo & Juliet) brings the madcap world of The Comedy of Errors to life in all its antic, anarchic glory.

By J.B. Priestley
Directed by Stephen Daldry
Produced by the National Theatre of Great Britain

We don’t live alone. We are responsible for each other. If men will not learn that lesson, they will be taught it in fire and blood and anguish.

Winner of 19 major accolades, including multiple Tony, Olivier and Drama Desk Awards, Stephen Daldry’s production of J.B. Priestley’s An Inspector Calls continues to astound audiences more than 25 years later with its eerie prescience. Staged by Daldry (Billy Elliot, The Crown) in 1992 at the National Theatre, this “visually astonishing” (Daily Express) reinterpretation of Priestley’s expressionistic thriller has been hailed as one of “the defining productions” of modern British theatre, “a work of great directorial daring, breathtaking visual invention and passionate moral urgency” (Daily Telegraph).

A festive evening at the home of the Birlings, a well-heeled British family, is suddenly punctured by a mysterious visitor: a grim inspector investigating the death of a young woman. As questions multiply and guilt mounts, the Birlings’ entanglement in the affair shatters the foundations of their comfortable lives. Existing simultaneously in 1912, post-war society and modern day, Daldry’s spectacular production is both a plea for a more just society and a warning of what’s to come if we fail to attain it.

THE PANTIES, THE PARTNER AND THE PROFIT:
Scenes from the Heroic Life of the Middle Class

The world turned upside-down. Thanks to one faulty waistband on a pair of Louise Mask’s underwear, the lives of three generations are changed forever. And what’s with that enormous sea serpent that keeps appearing just offshore? Leaping from Boston in 1950 to Wall Street in 1986 to lavish Malibu today, David Ives (The Liar, The Heir Apparent, The Metromaniacs) gives his “translaptation” treatment to Carl Sternheim’s epic trilogy, Scenes from the Heroic Life of the Middle Class—transforming three full-length plays into a single brisk evening filled with panties falling, lovers juggling, dueling pistols shooting and other signs of near-apocalypse.

David Ives has said publicly that “German comedy” is largely an oxymoron—except for Sternheim (1878-1942), one of the most successful and incisive social satirists of his very fraught day. Returning for one final collaboration with Artistic Director Michael Kahn (The School for Lies), Ives sharpens his celebrated wit to razor-like social commentary—at once ludicrous, larger-than-life and close to the bone, making us wonder along the way, as all social satirists do, just where all this madness is going both onstage and off.

Sponsored by the Robert and Arlene Kogod Family Foundation. This play was commissioned through a grant from the Beech Street Foundation.

And thus I clothe my naked villainy
With odd old ends stol’n forth of Holy Writ,
And seem a saint when most I play the devil.

What does it look like when a man with no scruples stops at nothing to gain power? If you’re unsure, Richard of Gloucester will gladly demonstrate. What he lacks in looks he makes up for in bottomless ambition, ruthless cunning and rapacious zeal: the crown, at all costs. As he climbs ever higher, Richard bends the world to his will until even his mother can’t bear to own him. Shakespeare’s mesmerizing chronicle of the megalomaniac’s rampage to the throne—one of his greatest variations on history—remains an irresistible study of villainy. David Muse returns after his hit production of King Charles III, rendered “more incisively than…in its Broadway incarnation” (The Washington Post).

Never be too good or too bad. The world will punish you for both.

Becky Sharp never blushes. As the wily Becky and her gentle friend Amelia scale social ladders and hurdle the whims of fate, only one question matters: how do you get what you want in life? A bright dance hall pageant poking fun at all our pretenses, this new adaptation by Kate Hamill (Sense and Sensibility, The Wall Street Journal’s Playwright of the Year 2017) harnesses the frivolity of Thackeray’s novel while recasting its (anti) heroines as complex, vibrant women, delivering “a gift to actors and a goody bag for its audience” (New York Times).

By Ellen McLaughlin
Adapted from Aeschylus
Directed by Michael Kahn

Through ten years of war, grief and rage, Queen Clytemnestra lies in wait for her husband Agamemnon’s return, determined to avenge one child, only to doom the others. The sole surviving trilogy in Greek tragedy, The Oresteia chronicles a deluge of violence that can only be stopped when society peers into its own soul and sees the depths of its complicity. Playwright Ellen McLaughlin (The Persians) has written a new version of the classic, commissioned by STC. Her play, three years in the making, weaves together the works of Aeschylus with stunning poetry and emotional heft. An epic, world-premiere interpretation of this pillar of western culture, The Oresteia makes a fitting end to Michael Kahn’s tenure as Artistic Director of the Shakespeare Theatre Company.

The Oresteia is made possible by a generous grant from The Roy Cockrum Foundation.

To renew or order a subscription, contact our Box Office.