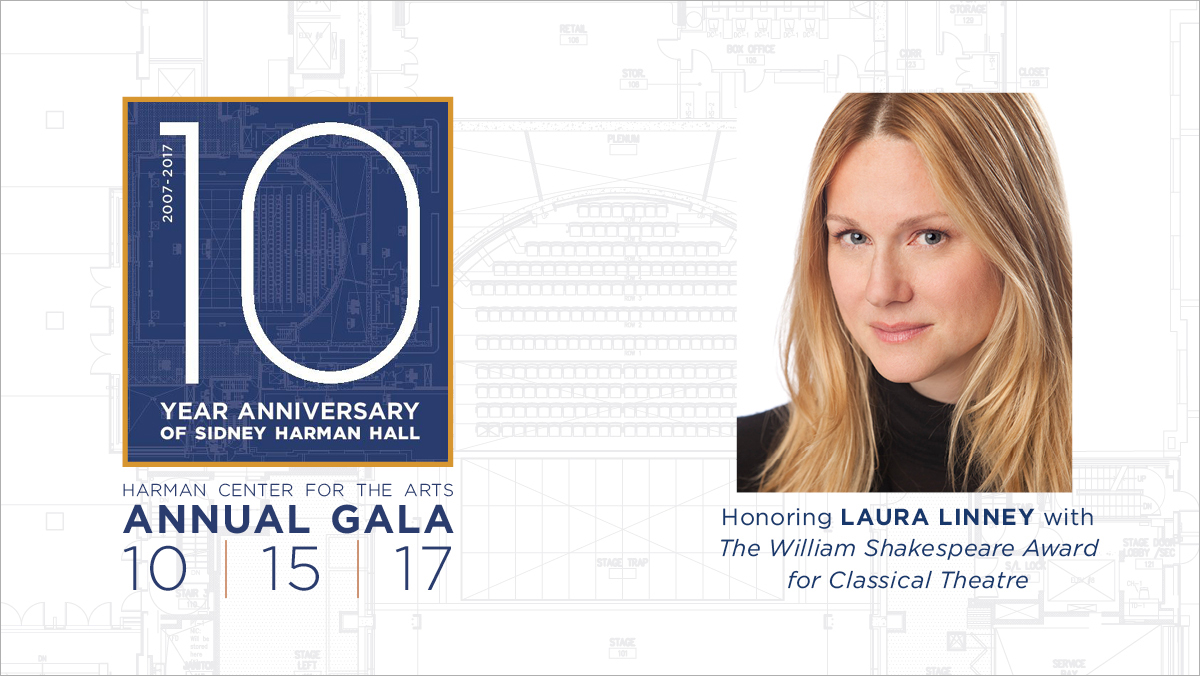 The Will Award will be presented to Laura Linney for contributions to classical theatre in America. A student of Michael Kahn’s at Juilliard, Laura has a long and illustrious career of artistic achievement. She recently was nominated for a Tony Award for Best Performance by an Actress in a Leading Role for the Manhattan Theatre Club’s hit spring revival of Lillian Hellman’s The Little Foxes, in which she alternated with Cynthia Nixon in the lead roles of Regina Hubbard Giddens and Birdie Hubbard. Other notable classical theatre credits include Arthur Miller’s The Crucible, Uncle Vanya, Les Liaisons Dangereuses and The Seagull. She won Emmy and Golden Globe Awards for her performances as Abigail Adams in the HBO miniseries John Adams and as Cathy Jamison in Showtime’s The Big C. For her critically acclaimed performances across theatre, film and television, Laura has been nominated for four Tony Awards, three Academy Awards, a BAFTA Award and five Golden Globe Awards and won a SAG Award, National Board of Review Award, two Golden Globes and four Emmy Awards. She holds two honorary Doctorates from her alma maters, Brown University and The Juilliard School.

See the benefits of sponsorship.

About the Annual Gala

Since its inception in 2006, the Shakespeare Theatre Company’s annual event has been hailed by Washington Life Magazine as the “most buzzed-about gala” and provides indispensable funds for the Shakespeare Theatre Company’s education and outreach programs, including the annual Free For All. Thanks to the generosity of our gala attendees, the Free For All brings two weeks of free Shakespeare to D.C.-area residents each year. Since Michael Kahn founded the event in 1991, more than 660,000 people—many of whom might not otherwise possess the means to see a full-scale theatrical production—have enjoyed some of STC’s most acclaimed productions completely free of charge through the Free For All. Featured Wine of the 2017 Harman Center for the Arts Gala