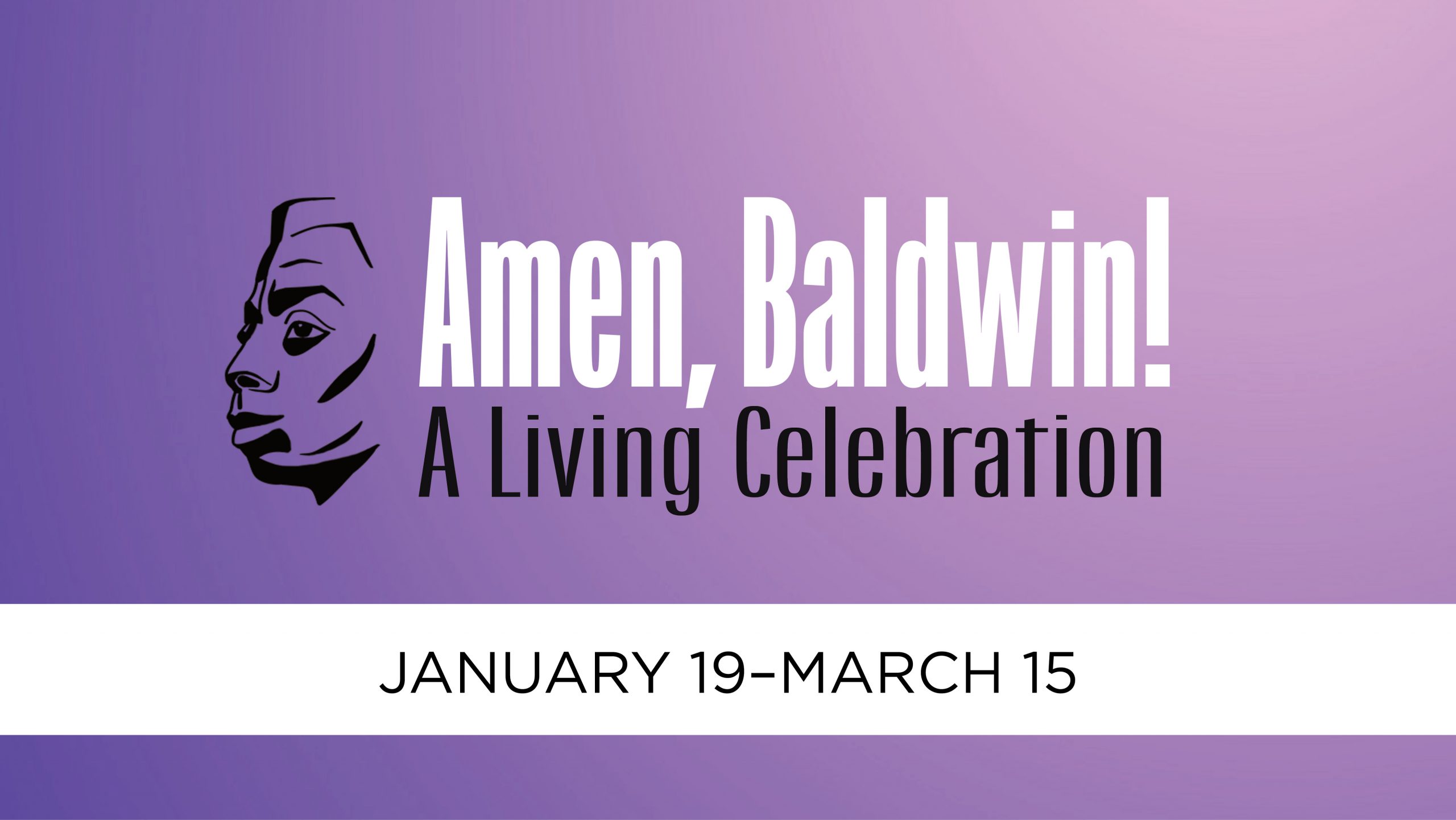 Amen, Baldwin!: A Living Celebration will unite institutions, community partners, local artists, and activists to 1) honor the legacy of James Baldwin and his history within Washington, D.C. and 2) provide opportunities to connect with STC’s production of The Amen Corner through select special events, free creative conversations, and other engagements both at Sidney Harman Hall and throughout the city.

I Am Not Your Negro, Sunday, January 19 at 7 p.m.
Narrated by Samuel L. Jackson, I Am Not Your Negro is a 2016 documentary film directed by Raoul Peck, based on James Baldwin’s unfinished manuscript Remember This House.
FREE, reservations required

Happenings at the Harman
Come directly from work, get a drink at the Forum bar, and transition into the evening with a unique mix of performances:
IMAG
Lemond Brown, better known as IMAG, blends soulful blues and funk rhythms with international flavor. IMAG’s unique style of hip hop reflects the gospel, jazz, and social issues contained in Baldwin’s play.
Thursday, February 13 at 6 p.m.
FREE, reservations encouraged

Words Beats & Life
After holding their Youth Poetry Grand Slam Finals at the Harman last spring, Words Beats & Life will return to the Forum to present a spoken word performance reflecting the themes present in The Amen Corner. Since 2000, Words Beats & Life have been unapologetic advocates for the transformative power of hip-hop culture in all its forms, empowering artists to relentlessly create and refine systems that demonstrate this notion of positive change through creativity.
Thursday, March 5 at 6 p.m.
FREE, reservations encouraged

Young Prose Night
Under 35 patrons can purchase a ticket to Young Prose Night (YPN) and be invited to a post-show reception with the cast, including complimentary drinks courtesy of our partners On Tap magazine, a special guest brewery, and STC’s wine sponsors, Robert Mondavi Private Selection and Ruffino Winery.
Friday, February 14 post-show
$35 tickets with code 20UNDER35

Page and Stage
Connect historical information with contemporary artistic vision at this conversation between a local scholar and the production’s creators.
Sunday, February 16 at 5 p.m.
FREE, reservations encouraged

Bookends
Experience an ultimate night of theatre at STC. First, chat with STC’s Education and Artistic staff about the playwright, the production’s historical context, and the director’s vision for the play. Attend the show (tickets not included) and finally, meet the actors after the curtain falls to hear their unique perspective.
Wednesday, February 19 at 5:30 p.m.
FREE, reservations encouraged

Sons of Baldwin is a spoken word duo made up of Kenneth Something and Duke the Root. As same-gender-loving poets, Sons of Baldwin has never asked for a seat at the table–instead, their bold, honest, unapologetic in-your-face poetry is known to shock audiences and flip the table upside down.

Duke the Root is an award-winning poet, organizer, and artivist. He is a Southern Fried Slam Champion and 3-time Mary Bowman DC Pride Slam Champion. Duke is the co-author of Baldwin Sent Me.

Kenneth Something is an award-winning spoken word artist. He is the founder of DewMore Baltimore and co-author of Baldwin Sent Me. His slam achievements include winning Word War, Baltimore Grand Slam, The National Poetry Slam and being ranked 3rd Slam Poet in the world in 2017.

Jeffrey Corry is a native of Alexandria, VA and is a graduate of Howard University and is pursuing a Masters Degree in Music Education from Trinity Washington University in Washington, D.C. Jeffrey is destined to excel in music and is known throughout the Washington Metropolitan area as “Alexandria’s Maestro and Soloist Extraordinaire.” He has recorded several gospel instrumental CDs through Divine Intervention Christian Studios in Clinton, MD. He holds memberships with Phi Mu Alpha Sinfonia Music Fraternity, Choir Psi Phi National Music Society DC Chapter, and Phi Beta Sigma Fraternity Inc. Jeffrey’s musical influences are Richard Smallwood, Stevie Wonder, Trey McLaughlin, Allyn Johnson, Monty Alexander, George Duke, and Doobie Powell just to name a few. He presently serves as Music Teacher at From the Heart Christian School and is presently a member of From the Heart Church Ministries in Suitland, Maryland where Bishop John Cherry, II is Pastor.

The Family Room at Metropolitan A.M.E. Church
Join us at Metropolitan AME church to hear actor and activist Dyllón Burnside from Pose on FX and critically-acclaimed author Darnell Moore as they unpack what it means to remove limitations around Black identity and as we invite their frank dialogue on what it means to be both Black and LGBTQ in America today. Music will be curated by Marty A. Lamar from the cast of The Amen Corner. To purchase tickets please visit thefamilyroom.eventbrite.com.
February 27th, 6:30 p.m.

*each purchased ticket for this event is a tax-deductible donation to Metropolitan A.M.E. Church and will help with the preservation of this important, historic institution.

Pre-show Performance: Pages Matam (Curated by Busboys and Poets)
Pages Matam is an international artist, writer, organizer, and educator from Cameroon, Central Africa, currently residing in Washington, D.C. He is Director of Poetry Events for Busboys and Poets, Callaloo Fellow, and author of the award-winning, full-length collection The Heart of a Comet (Write Bloody, 2014). A National poetry slam champion and NFHA Cultural Ambassador, he has been featured on various renowned platforms and venues such as the NAACP, Huffington Post, Okay Africa, Macy’s, the Kennedy Center, the Apollo Theater, BET Lyric Cafe, TV One’s Verses & Flow, and more. He is a proud gummy bear elitist, bow-tie enthusiast, professional hugger, and anime fanatic. pagesmatam.com
Friday, February 28 at 7:30 p.m.
FREE

Black Classicists and the works of James Baldwin: Panel Discussion and Reception

Join us at Harvard University’s Center, 3100 Whitehaven Street NW, Washington, DC 20008, for Hellenic Studies for a panel discussion on James Baldwin’s literary works and their new exhibit Black Classicists: A Mural Mosaic. The panel discussion will be followed by a reception.

Special guest speakers include renowned actor E. Faye Butler from the cast of The Amen Corner and Nefertiti Burton, professor, and chairperson of Howard University’s Department of Theatre Arts.

Book Club
Go Tell It on the Mountain by James Baldwin
First published in 1953, Baldwin’s first major work is a semi-autobiographical novel that has established itself as an American classic. With lyrical precision, psychological directness, resonating symbolic power, and a rage that is at once unrelenting and compassionate, Baldwin chronicles a 14-year-old boy’s discovery of the terms of his identity as the stepson of the minister of a storefront Pentecostal church in Harlem, one Saturday in March of 1935. Baldwin’s rendering of his protagonist’s spiritual, sexual, and moral struggle of self-invention opened new possibilities in the American language and in the way Americans understand themselves.
Tuesday, March 3 at 6 p.m.
FREE, reservations encouraged

Brush Up
Prepare for the show at this quick pre-show chat with STC Education staff. Learn what to expect along with thought-provoking tidbits about the play’s history and production’s artistry. Plus, learn words related to the show in American Sign Language. Scheduled alongside Open Caption performances, Brush Up provides a unique opportunity to have an ASL-interpreted conversation with interpreter Nan Cronk-Walker.
Tuesday, March 10 at 6:45 p.m.
FREE, reservations encouraged