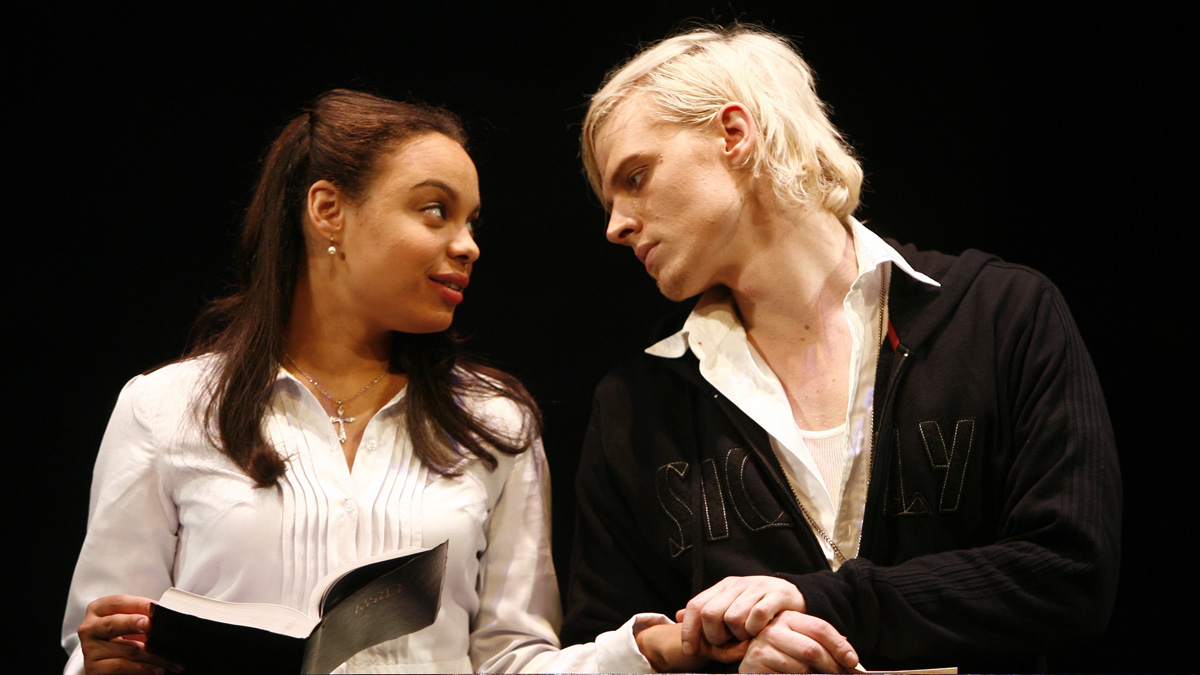 April 1990
STC’s non-traditional casting makes headlines when Pat Carroll takes on the traditionally male role of Falstaff in The Merry Wives of Windsor. The next season Andre Braugher plays the role of Iago alongside Avery Brook’s title character in Othello.

September 1990
At STC’s first open rehearsal, theatregoers line up around the block to watch Stacy Keach rehearse Richard III under the direction of Michael Kahn. Keach later returns to STC to play the title roles in Macbeth in 1995 and King Lear in 2009.

June 1991
STC changes the cultural landscape of the nation’s capital with its first Free For All. More than 2,500 theatregoers watch each performance of The Merry Wives of Windsor under the stars at Carter Barron Amphitheatre. This annual tradition of free Shakespeare continues today.

March 1992
After six years in residency in the Folger Library’s Elizabethan theatre, STC moves mid-season to a new performance space: the 451-seat Lansburgh Theatre, which provides both more flexibility in production and technical processes and more space for STC’s growing audience. The opening of the theatre was a turning point in the revitalization of the Penn Quarter neighborhood.

December 1998
The Clintons, then the First Family, attend Twelfth Night. In the words of theatre critic Bob Mondello (WETA Around Town), “I am almost certain that history was made when the President went to the Shakespeare Theatre. I uncovered no other instance when a sitting president attended a regional theatre.”

June 2000
The inaugural class of the Shakespeare Theatre Company Academy for Classical Acting at The George Washington University begins their one-year intensive MFA program in classical acting. Nearly 200 actors auditioned for the 24 spots.

August 2001
Michael Kahn directs The Oedipus Plays, a new translation and adaptation of Sophocles’ Theban trilogy. The then-Greek Ambassador to the U.S. and the Cultural Attaché attend this one-night production. After their enthusiastic recommendations, STC is invited to perform The Oedipus Plays at the Athens Festival in Greece in September 2003.

April 2004
STC produces five of Tennessee Williams’ one-acts, including several world premieres, as part of the Kennedy Center’s “Tennessee Williams Explored” program. Michael Kahn, a close friend and collaborator of Williams, is uniquely suited to direct Five by Tenn, which is later produced by the Manhattan Theatre Club.

January 2007
The Shakespeare in Washington celebration, conceived by the Kennedy Center’s Michael Kaiser and curated by STC’s Michael Kahn, features the work of more than 70 arts organizations in more than 500 performances, many free of charge.

August 2011
STC kicks off its 25th  Anniversary Season under the direction of Michael Kahn. Special events include presentations of the hit musical FELA! and Basil Twist’s Petrushka, as well as two Bard’s Broadway productions, Two Gentlemen of Verona and The Boys From Syracuse.

April 2016
STC’s production of A Midsummer Night’s Dream, originally produced in 2012, travels to China to kick off the 27th Macao Arts Festival.

February 2017
Michael Kahn announces that the 2018–2019 Season will be his last at STC. An international search begins for his successor, and in September 2018, STC names Simon Godwin, Associate Director of London’s National Theatre, as the incoming artistic director.

June 2019
After 33 years as artistic director, Michael Kahn retires from his post. His final production at STC is a world-premiere adaptation of The Oresteia by Ellen McLaughlin.

November 2019
At the annual Gala, STC announces that the Lansburgh Theatre has been renamed the Michael R. Klein Theatre at the Lansburgh in honor of the longtime Chair of STC’s Board of Trustees.

December 2019
As part of a three-year commitment to family programming, STC produces the world premiere of Peter Pan and Wendy, a new adaptation of J.M. Barrie’s Peter Pan by Lauren Gunderson.

February 2020
Simon Godwin makes his directorial debut at STC with a production of the seldom-staged Timon of Athens. Kathryn Hunter plays the traditionally male protagonist.