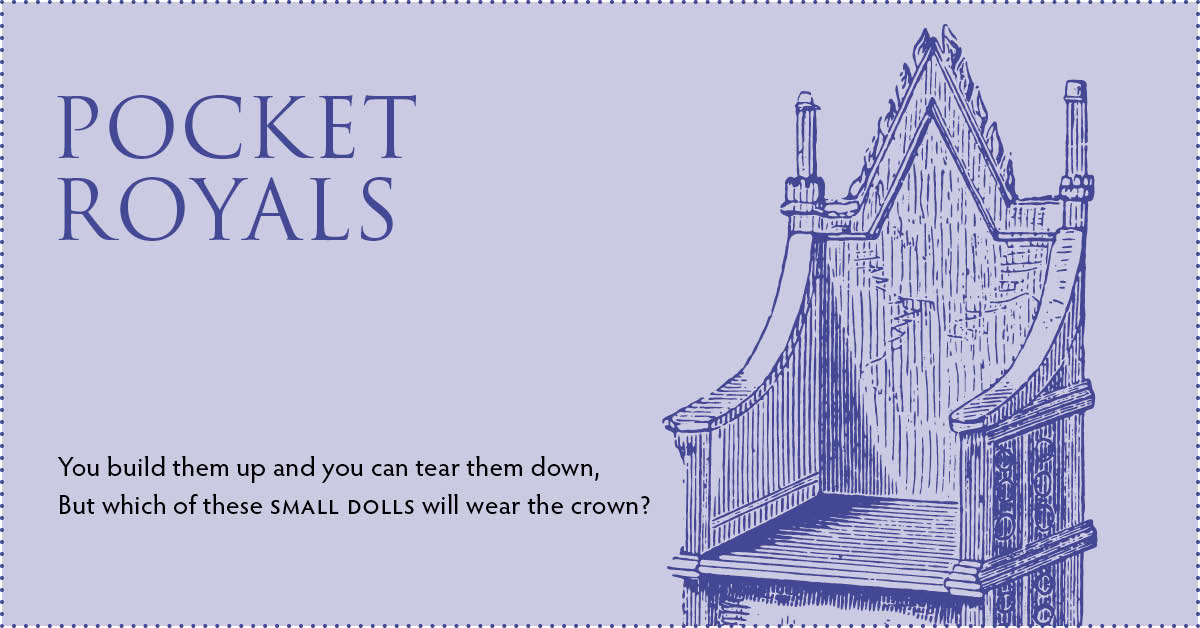 Dress them up, dress them down, they’re still British royalty. With our Pocket Royals series, learn all about the British royal family, from their fashion to their foibles and more! Then catch them at our production of King Charles III, playing at Sidney Harman Hall through March 12.

Check back weekly as our royal court expands. The British royal family may seem as quintessentially English as a proper cup of tea, but the same way that tea was actually imported from abroad, the Windsor family actually comes from German descent—they changed their name from Saxe-Coburg and Gotha to the English-sounding Windsor in 1917. But how, then, did they end up on the throne? Well, it’s a bit of a complicated story. Like any lineage, you could go very far back into British history to trace the line of descent to the current monarch. Most of the monarchs we recognize today as powerhouse British royals were in fact imports from other countries, including William the Conqueror himself. But we needn’t go that far back to find the Windsors—150 years or so will do the trick.

Queen Victoria was of a complicated long lineage called the House of Hanover. When Prince Albert married Victoria in 1840, she took his last name, as was tradition, and their children bore his name rather than hers, though she was the crowned monarch. When Victoria died in 1901, Albert’s royal House of Saxe-Coburg and Gotha inherited the throne.  Edward VII Victoria’s eldest son, ruled until 1910 and is considered the first British king of the House of Saxe-Coburg and Gotha, carrying on his father’s lineage rather than his mothers. His son, George V, ruled through 1936 and oversaw the changing of the family’s official surname to Windsor after anti-German sentiment rose during the Second World War. The 1917 proclamation stated that all British descendants of Victoria and Albert, in the male line, meaning Albert’s side of the family, were to bear the surname Windsor except for women who married into other families. His eldest son Edward VIII abdicated the throne in 1936 and George V’s second son Albert was crowned King George VI later that year. When George VI died in 1952, his eldest daughter Elizabeth took the crown, and that is Britain’s current Queen Elizabeth II.

Elizabeth’s husband Philip is a member of the long-titled House of Schleswig-Holstein-Sonderburg-Glücksburg, though Philip changed his surname to Mountbatten (after his beloved uncle) and abandoned his titles before marrying Elizabeth in 1947. When Elizabeth became Queen in 1952, Philip assumed the royal house was changed to the House of Mountbatten. However, Elizabeth’s mother and then Prime Minister Winston Churchill advised the new Queen to issue a proclamation against this, which she did soon thereafter. All of her descendants, other than the female descendants who would marry into another family, would bear the name of Windsor, she proclaimed. She reaffirmed this later in 1960, though she added that descendants who do not hold the title of Prince or Princess would use the hyphenated surname Mountbatten-Windsor.

Paper Dolls and the Windsor Family

Paper dolls have reportedly been around as long as there has been paper; archaeologists have even found paper dolls dating back to 900 A.D. Royalty and paper dolls have a long history too—18th century French “pantins,” or dancing-jack puppets, were used to mock nobility and the court. The tradition of using paper dolls to depict royalty or the elite lasted well into the 19th and early 20th century, with companies like Dennison Manufacturing and Stokes and Company producing dolls with crepe paper accessories to match their subject’s expanding wardrobes.

This was especially popular during the Victorian period, when mass-manufactured pictures were in vogue. Raphael Tuck House, or Tuck’s, a popular printer of Christmas cards and postcards for all walks of society, began producing paper dolls around 1893, their first doll a baby with a nursing bottle. In 1883 Queen Victoria herself granted the manufacturer a Royal Warrant of Appointment, meaning they were official art publishers to the reigning monarch. Future sovereigns, including Queen Elizabeth II herself, continued this warrant. Under this patronage, Tuck’s was able to diversify and expand their production. Now antique collectables, Tuck’s paper dolls are distinguishable by trademark and the wide assortment of costumes and interchangeable heads for each doll. Tuck’s continued to make paper dolls well into the 20th century, but their manufacturing facilities in Germany were destroyed by WWII.

Not only was the royal family acting as patron to paper doll production, but they were increasingly portrayed as the subjects themselves. The young princesses were depicted in 1939’s “The Princess Paper Doll Book” by Saalfield, which let girls dress up the young royals. It also gave mothers inspiration for homemade clothes for their own little girls, designed off of the royal’s accompanying large wardrobe. No longer used for mocking the royals, paper dolls during Elizabeth II’s lifetime are used to bring people closer to the monarchs and royal family that rule over them. Other collections of Windsor-inspired paper dolls were released at Charles and Diana’s wedding, William and Kate’s engagement and subsequent wedding and the royal births. They mark the biggest events of the royal family’s history—as worldwide celebrities they continue to be popular subjects for paper dolls of their own.