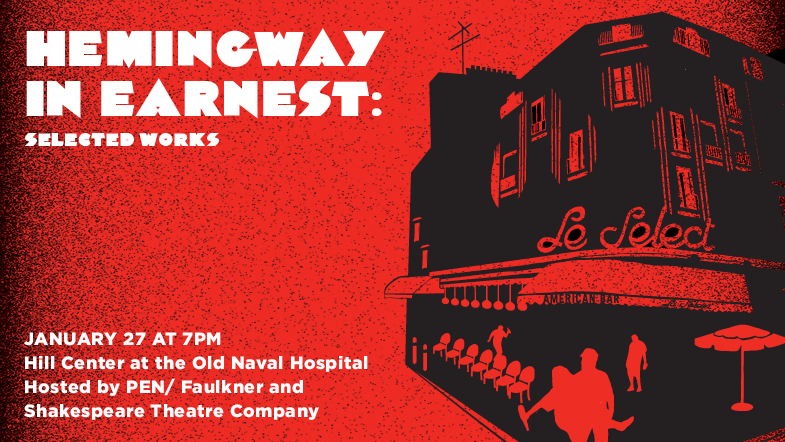 “Every man’s life ends the same way. It is only the details of how he lived and how he died that distinguish one man from another.” –Ernest Hemingway

Ernest Hemingway distinguished himself against his peers—who happened to be some of the most respected writers of all time—as an audacious man with strong opinions and an ability to craft words with an experimental and exacting style. Though controversial in both his life and his writing, Hemingway remains a key figure in American literary history.

The PEN/Faulkner Foundation, Shakespeare Theatre Company and Hill Center at the Old Naval Hospital are hosting an evening retrospective of Hemingway’s writing. With readings from local writers, scholars and performers, “Hemingway in Earnest” will take a good, hard look at “Papa’s” most powerful, challenging and problematic texts. Authors will reflect on their relationship with Hemingway, and actors will bring his words to life in preparation for the late-winter production of The Select (The Sun Also Rises) by Elevator Repair Service.

The PEN/Faulkner Foundation, now celebrating its 36th year, is an independent non-profit committed to building audiences for literature by bringing writers together with their readers. We accomplish our mission through sponsoring readings by distinguished writers who have won the respect of readers and writers alike, the PEN/Faulkner Award for Fiction, the PEN/Malamud Award honoring excellence in the short story, the Eudora Welty Lecture, and the Writers in Schools program, which brings authors, and free copies of their books, to high school classrooms in Washington, D.C. and Baltimore, MD.

Hill Center at the Old Naval Hospital
7 – 9 p.m.
This is a FREE event